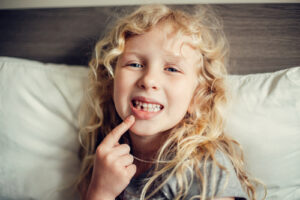 Your dentist recommends that your 8-year-old see an orthodontist. You might be surprised by this suggestion, but your dentist only says this when they see something in your child’s alignment or bite that could benefit from early orthodontic treatment. You can probably see it yourself, especially if your child has a pronounced overbite or underbite or extreme crowding. The benefits of braces for kids are many and could ultimately save time, energy, and costs.

A little kid’s jaw is far more pliable the younger they are because they’re still growing. Positive results from orthodontia are far more likely than attempting to make a big change once the face and jaws have finished growing.

If your child has an obvious bite problem it’s better to address it sooner rather than later. By getting early orthodontic treatment for six months to a year or so, the braces they will need later as a teenager can be simplified. Potentially, treatment can be both shorter and less complicated, which means less time in brackets, wires, or aligners, less discomfort, and a less costly investment.

Little kids are usually not hung up on their looks. Unfortunately, though, it’s never too early to be made fun of, and some kids are known to make children with extreme dental conditions feel bad about something they can’t control.

By pursuing early orthodontic treatment, you improve your child’s appearance and prevent them from feeling self-conscious about their teeth. They’ll get a much-needed self-esteem boost and healthier teeth at the same time.

The Logistics Behind Interceptive Orthodontics

An early visit to the orthodontist can uncover subtle problems with jaw growth and a child’s developing permanent teeth. Addressed early, minimal treatment can manage the issues instead of waiting until later when they would have been an inevitable problem and more complicated.

Your orthodontist can guide the growth of your child’s jawbones and accommodate erupting teeth. An expander, a space maintainer, a tongue crib, upper braces, and a Herbst appliance are all orthodontic appliances that can simplify the intensity of later orthodontic treatment.

A recommendation to see an orthodontist does not always result in early orthodontic treatment, but if your dentist does suggest this step, take them seriously and have your child’s teeth and bite checked out. Getting braces or an appliance early can help make their adolescence easier later, and you’ll both be happy about that. Contact Dr. Soleil at Soleil Orthodontics in Woodinville, WA, to schedule a consultation.